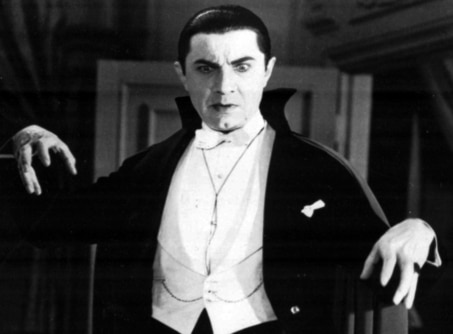 On this week’s episode of Judge John Hodgman, His Honor set a task for devoted listeners. As your Halloween homework, he asked you to research the origin of Dracula’s use of the term “Bleh!”

Since you are a wonderful, loyal and intellectually curious audience, many listeners wrote in promoting a variety of interesting theories. The first, and likely the most commonly held, suggests that the “word” slowly seeped into our lexicon whilst we absorbed countless indistinguishable impressions of legendary Dracula performer Bela Lugosi. Nathaniel Reha promoted this theory, lifting a quote from the Straight Dope boards: “Actually, thinking about it a sec, I’m hearing a hundred-odd bad impersonations of Bela Lugosi in my head, doing the “I vant to suck your blood!” line. Blood, in the bad accent, becomes ‘bluh’ (with a shortened, almost silent, d or t sound at the end of the word), which just becomes the one readily identifiable word when you think of someone’s bad Hungarian/Transylvanian vampire-speak.” Though listener John McGlothlin notes “[I]f your letter-writer-inner was convinced that ‘bluh’ did not originate in strict canon, that would rule out it stemming directly from Lugosi’s accent in the 1930’s Dracula film.”

Which leads to our second theory. Several listeners suggested that the phrase first appeared in a 1952 Bela Lugosi film called “My Son the Vampire”. Jamie McCormick wrote: “The earliest occurrence I can find of a Dracula character making the sound is from ‘My Son, The Vampire’, a 1953 musical satire starring Lugosi in essence mocking the franchise he himself created. Nosferatu, in company with the other early silent Dracula films, makes no reference to the sound, nor does Lugosi make the sound in his early and serious-minded Dracula films. Note especially the last line of the film’s title track – “He wants Bluuuuuuuuuuud!”

Jamie also provided links to the film for those who want to verify this theory. You can find the full film on You Tube or on Netflix; but Jamie also astutely notes that only the Netflix version has the song “My Son, the Vampire” rolling over the credits. Why?

I did some further research. Actually, that title song provides a rather interesting clue. As listener John McGlothlin noted, “[A]round . . . 1964, Allan Sherman put out a comedy song titled “My Son, the Vampire” which opens with “blood!” being screamed in a strange way that sounds rather ‘bluh’ like.” This Allan Sherman tune is the title song of the movie in some (but not all) versions of the film. According to IMDB , the film’s original title was “Vampire Over London”, (this is the version available on You Tube), but it was apparently retitled “My Son, the Vampire” for its 1963 American re-release (six years after Bela Lugosi’s death) to cash in on the success of Allan Sherman’s album, “My Son, the Folksinger”. Indeed, there is an American trailer for the film that prominently features Mr. Sherman:

I also discovered that Rhino released an EP of Sherman’s work in 2005 that includes “My Son, The Vampire”. So for 99 cents you can nab the song from itunes and consider the audio evidence yourself. (Although, truthfully, you hear him utter the critical word during the few seconds of the song’s free preview).

A third theory, promoted by multiple listeners, claims that the sound was first uttered by comedian Gabe Dell. Kevin Harris first advanced this theory without any video or audio evidence; but listener Cayman Unterborn did all of the heavy lifting for him by providing an extensive defense of Dell as the source of the original parody. First, he provided this explanation from Svenghoolie (who he identifies as a venerable Chicago Horror Icon): “. . . Bela, as Dracula, never said ‘Bleh!’ It was indeed an imitator – back in the days of the old Steve Allen TV show; one of his stock players, Gabriel Dell (who had, at one time, been a ‘Dead End Kid’ in movies – and may have even worked with Bela in a cut-rate Monogram movie) was playing Dracula – and did the ‘bleh!’ thing (or, do you spell it ‘blah!’) From there on, it was history. So many Drac and/or Bela impersonators have done that now that most people assume that Bela actually did that . . .” Unterborn also found a CD that appears to feature a 1963 recording of Gabriel Dell doing his Dracula character (not on the Steve Allen show) and he also points out that you can download audio of the relevant Steve Allen Show episodes where Dell performs as Dracula, but it’s going to cost. In terms of putting these performances on the correct spot in our “bleh!” timeline, I discovered that, according to IMDB, Dell performed this character on Steve Allen’s Plymouth Show in 1957 (episode 2.35) and again in 1959 (episode 5.3). So that puts it after the original release of “Vampire Over London”, but before the re-release of that film with the Allan Sherman title song.

Finally, two listeners suggested a connection to comedian Lenny Bruce. John McGlothin (who, along with Adam Pracht, tried to maximize his chances of winning by providing support for three of these theories) notes that “[I]n the 1960s, Lenny Bruce did a parody of Dracula as a Yiddish man, and the Eastern European accent may have made blood sound a bit like “bluh.” But McGlothin did not provide links to any video or audio which verifies Bruce’s performance or its place in this timeline. This theory does, however, have the backing of reference librarian Emily Menchal who states that there is support for the Lenny Bruce theory in David Skal’s book The Monster Show: A Cultural History of Horror.

That concludes my dutiful summary of the wonderful answers you uncovered.

So who’s right? Only one man can judge the true winner of this contest! And we await his verdict.