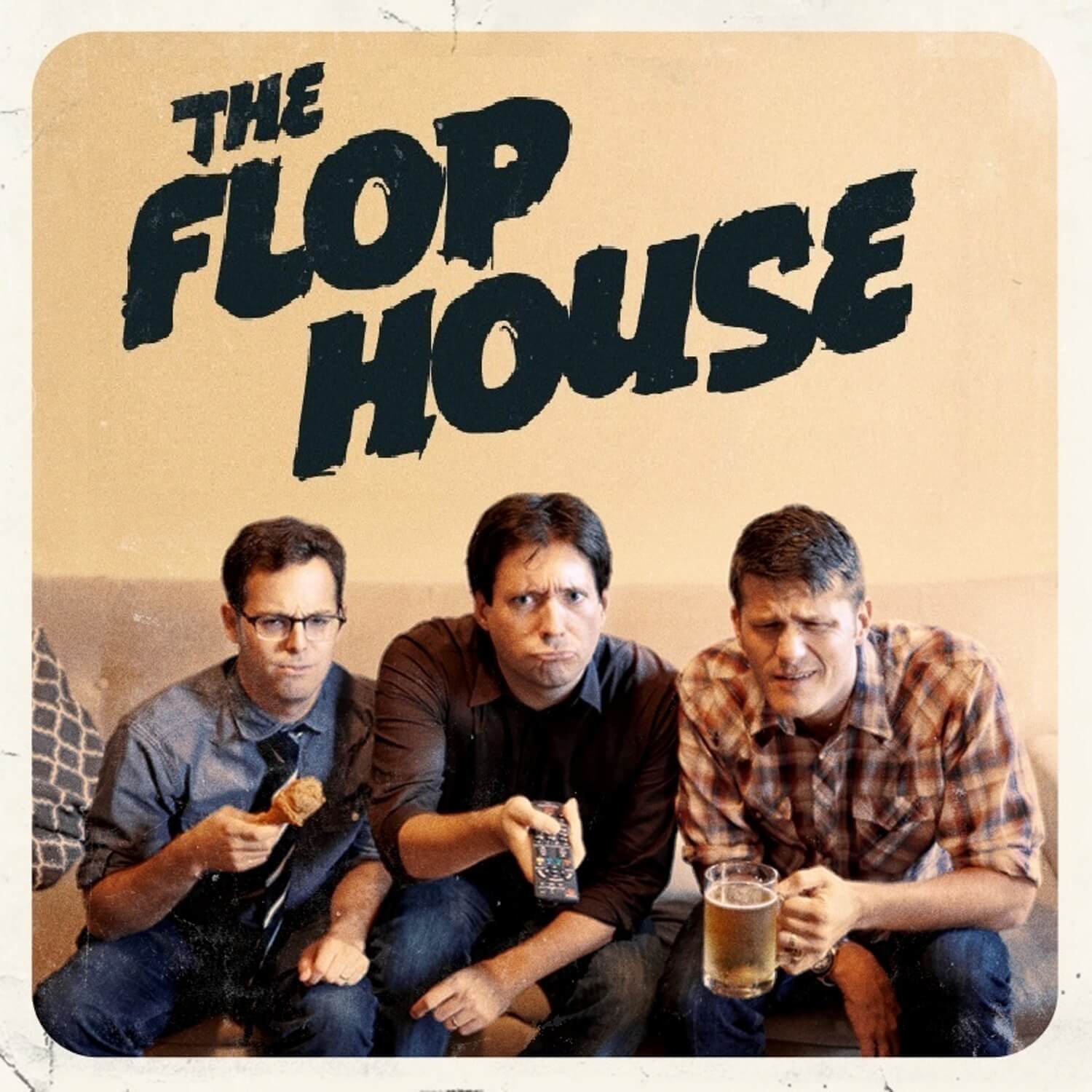 The Flop House is a movie podcast near and dear to my heart (me being assistant producer Jordan Kauwling). It was the very first podcast I’d ever heard. One day, while on the hunt for something to listen to in between class, I came across my very first episode: a movie starring Nicolas Cage called Rage. I soon found myself working my way through their entire back catalog. There were so many wonderful episodes for me to listen to, featuring so many truly terrible films: Wild Hogs, Beverly Hills Chihuahua, and other films that don’t have an animal in the title. My favorite episodes were those which featured living meme Nicolas Cage, and Cagemas – a December holiday celebrating the work of the actor – is my favorite time of year!

Cagemas is upon us once more, and this year the celebration is twofold as the Peaches [the hosts] celebrate their 300th episode! That’s right, The Flop House has been creating content for twelve long years!

I caught up with The Flop House hosts, Dan McCoy, Stuart Wellington and Elliott Kalan, to ask them a few questions about the show: 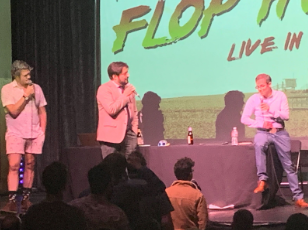 JORDAN KAUWLING: Thank you for agreeing to this interview and Merry Cagemas! So, I was wondering if you could tell me a little bit about how you all met and got started?

DAN MCCOY: I met Stuart in college, through a close mutual friend, although I only really got to know him after we both moved to New York City and were looking for people to hang out with. I found that we shared an affinity for things like horror and bad movies, so we started spending time together, watching terrible movies and goofing on them. That was one of the things that led to the podcast: me thinking that Stu was hilarious and wanting to get him on tape, doing his thing. The other inspiration for the podcast was purely mercenary: I was a struggling comedy person, and I was looking for something with a low barrier to entry that might become the next big thing. I put my money on podcasting, and for once I was correct.

JK: So cool! So, in the beginning I noticed there was no Elliott. Where did he come in?

DM: Elliott joined us at Episode 8: I Know Who Killed Me. I had met him through doing comedy at a basement theater and became fast friends with him, because I sensed a similar comic sensibility, and he liked a bunch of the same nerdy nonsense as me. Once he joined, things really started clicking because we sort of unwittingly fell into a classic comedy trio breakdown of “motor-mouthed nerd,” “chill party guy,” and “put-upon everyman,” (although our real-life personalities are a bit more multifaceted than that). We were also lucky to have fairly distinct speaking voices, which is an underrated quality on a podcast.

Do They Know It’s Cagemas? 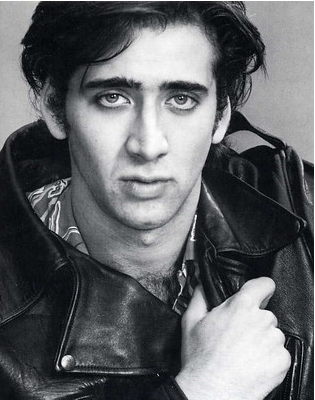 JK: The first episode I remember listening to was Rage starring Sir Nicolas Cage. Great episode! Can you tell me a little bit about how Cagemas came about? Whose idea was it?

DM: It really just came from us realizing that we had done a TON of Nic Cage movies, so we should make it an official thing, and give it its own time of year – kind of inflate it and make it into this big fake celebration, for the fun of it. And Nicolas Cage worked so well with Saint Nicolas. And he makes SO many bad movies – because of his poor money management – that it was a logical fit. Since then I’ve seen other “Cagemas” stuff on the internet, and I’m not ever sure whether people stole it from us (either directly, or secondhand) or whether it pre-dated us, but we definitely weren’t aware of anyone doing it before us, if it was something preexisting. We also started celebrating Nic Cage a bit before the Internet reached peak “Nicolas Cage is wacky.” And we sort of rode that wave, although we’re not actually on board with him as this campy, ironic figure, because he really IS a great actor. He just does a lot of dreck.

JK: How many Cagemas eps have you all done?

DM: It’s hard to say, because I really don’t keep tabs on this stuff well, and I only learned how to properly tag episodes late into our run, but I THINK there have been seven “official” Cagemas episodes, but that doesn’t count a bunch of “Cagemas in July” episodes and episodes featuring Nicolas Cage that we did before Cagemas was a thing. Looking over his IMDB actor credits I see that we’ve actually done EIGHTEEN Nicolas Cage movies in our 12 years or podcasting. I’ll leave it to the fans to argue about whether they’re all real holiday episodes, though.

What Cagemas Means to Me

JK: As both a fan and an assistant producer on the show I say all eighteen count for Cagemas. So, I’d like to get a little sentimental for a moment if we can? It being the season and all, I’d like to know what each of you think is the true meaning of Cagemas?

STUART WELLINGTON: I think the true meaning of Cagemas is that if you treat people like you’d like to be treated, listen to your parents, and do all of your homework, then one night in December Nicolas Cage may creep through your partially cracked bedroom window. He’ll slither over to your carefully decorated Cagemas Tree. Underneath your tree, he’ll leave all the good boys and girls motorcycles and dinosaur bones.

JK: One could only hope. And how about you, Dan? What does Cagemas mean to you?

DM: That you should tear into life with the same zest that Nicolas Cage reserves for his most over-the-top performances.

SW: This is a bit of a deep cut, but I have a lot of affection for the movie, Next [Episode 9]. That’s the movie where Nicolas Cage has the magical ability to see what is going to happen next. So in the climax of the movie where Nicolas Cage is leading a team of commandos on a raid, it’s just a bunch of Nic Cage pointing, then the commandos shooting bad guys before they have a chance to shoot. It is probably the least exciting way to stage a gunfight.

EK: My favorite Cagemas movie to actually watch is probably Stolen [Episode 124], a pretty by-the-numbers heist revenge movie that’s kind of fun and inoffensive, and Danny Huston wears a hat in it. On the other side of things, I remember enjoying taking apart the movie Seeking Justice, in which Nic Cage becomes part of Guy Pearce’s underground vigilante justice group by buying a specific brand of candy from a vending machine. The movie itself is fairly noxious, but the candy thing always stuck with me.

DM: I’ll make a pitch for Trespass, which we watched way back for episode #95. I don’t know if it’s the best episode, and it may not be the best one for new listeners, because our friend Zhubin subbed in for Stuart, but the film is a perfect marriage of Cage in his zany mode (as opposed to a lot of the more sleepwalk-y performances we got later) with Joel Schumacher’s overheated direction. It’s a lot of fun.

JK: Sounds like it! Well, this has been a blast! Thank you Dan, Stu and Elliott for your time and Merry Cagemas!

And a Merry Cagemas to you, too! Be sure to listen to the 300th episode!